People wake up! Government and politicians of all levels are using this so called Pandemic to establish control. Of you and your lives.

They do not follow any rules, making them up as they go. The Constitution is being trampled and used as asswipe by them.

I was once made a statement long ago. On a gaming forum I frequented, way back in my online gaming days.

‘Rules? What are rules? I don’t need no stinking rules!!’

If they do not want to follow them, why should we???

Insult To Injury: Gavin Newsom Locks Down California, And Then Mocks Small Businesses

When the Ruling Class Needs to Steal Elections

Doctors warn CDC to tell public about side effects of COVID vaccines, number of doses needed

Pope? Of what? I was raised in the Catholic faith, left it long ago..

Hopefully well see Marlin quality return to what it was years ago.

I likes my 336c which is older then yours truly….

But retracted? Nothing to see here..Move along…

This is a bit disturbing..

Here Is Who Runs Things If Perdue & Loeffler Lose the Race for U.S. Senate

Not Only Aren’t Republicans Reversing the 2020 Disaster, It’s Already Being Repeated

If this were true and nothing is done about it….

Biden’s ‘Return to Normalcy’ Is Going to Be Terrible

No. The stupid that is Gov Timmy Walz and the DFL party..

Remember – we’re all in it together. pic.twitter.com/8WtN8vmtuN

Joe Biden campaigned on a strict gun control platform, and he promised, “If you elect me, your taxes are going to be raised.” Now it looks like Biden has found a way to combine liberals’ two favorite pastimes: raising taxes and gun control.

Why Joe? Is that when you cure us of the Chinese Flu???

“You know every major individual of any consequence in the health field is saying we can save we can save 100,000 lives just between now and January 21 by wearing these masks,” Biden said, citing the date for the presidential inauguration.

Joe Biden: Why Are Reporters Asking Me Questions?

Asked Biden if he will encourage teacher unions to cooperate to get kids back in school because the COVID task force said it is safe to be in the classroom. He didn’t answer.

“Why are you the only guy that always shouts out questions?” he said. pic.twitter.com/x2DsG5Fmgo

Before becoming Biden’s campaign manager last March, O’Malley Dillon was in the same position for Biden’s purported gun-control czar-to-be, Beto O’Rourke. That’s right, she was running the campaign for the guy who said, “Hell yes, we’re going to take your AR-15,” during a primary presidential debate.

Nothing to see here…

And tell me what the clowns are doing to bring Christmas…Oh wait…that would be nothing!!

ATHEIST GETS BAN ON OPERATION CHRISTMAS CHILD AT SCHOOL

Leftists (AOC) Warned Not to Plot Punishment for Trump Supporters

“Tortious interference has been a law since before the Constitution. It is illegal, and has been for years for a third party to interfere with the legal commerce between one party and another,” Shirley told The Epoch Times on Nov. 19.

Indoctrinated children, brought to you by ‘Public’ Government schools..

This is the Leftist world. Imagine the outrage if it were reversed…The lap dog media and leftist shills would be outraged..

US Marshalls Brought In Over Threats To Trump’s Attorney

And another reason to own a firearm and be ready..

“There is utterly unfounded public hysteria driven by the media and politicians, it’s outrageous, this is the greatest hoax ever perpetrated on an unsuspecting public,” said Hodkinson.

Ossoff Thinks You Are Corrupt For Defending Your Rights Good news, Georgia!
If you live on a farm, you now qualify to marry the Chairman of the New York Stock Exchange! https://t.co/dLXFantplB

Is he insulting farmers, women or both???

CNN’s Brian Stelter Presents Hit-List of Conservative Media Outlets: We MUST Censor Them

Think they will listen?

Ticketmaster has a plan.

In order to open up venues and stage music concerts again, audience members would have to show proof of vaccination or a recent negative virus test. Otherwise, they wouldn’t be able to purchase a ticket.

Perfect. A stadium full of obedient, self-congratulating sheep. What will the musicians be playing? Funeral marches?

Rigorous New study: Lockdowns & masks are useless and might even increase COVID-19 spread

Here’s How to Think About the Danish Mask Study

Stand firm against tyranny and assholes..

The Morning Briefing: Resistance to Tyranny is Being Served for Thanksgiving 2020

Biden Wants To Tax You To Tune Of $34 Billion

1 Easy Tip For Abiding By Your Governor’s Holiday Restrictions

“If you want a picture of the future, imagine a boot stamping on a human face—for ever.” — George Orwell

Thanksgiving Lockdown: If Biden Had His Way We Would All Be Eating Frozen TV Dinners Solo

Reinstated coronavirus restrictions by state: What you need to know

Biden …Free my ass. Someone will pay!

I’d say it is past time …
Brandon Smith: Now Is The Time For Americans To Rebel Against Lockdowns, Mask Laws And Forced Vaccination — NC Renegades

Who’d a Thought Pissing Off Cops and Cutting Budgets Would Have ANY Impact?

One is beginning to wonder…

Is There Anywhere Left to Live Free? 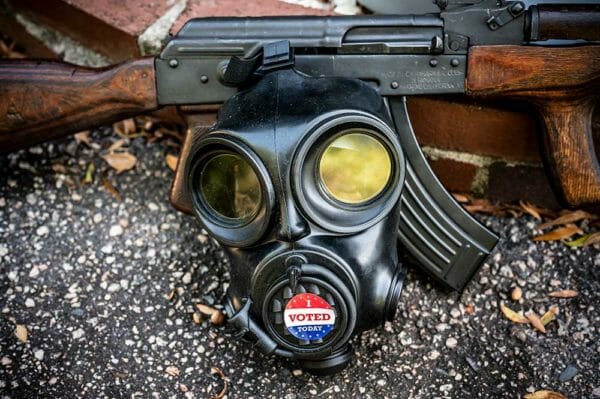 “More people may die” from COVID-19 without a smooth transition on vaccine distribution, warned President-elect Joe Biden. (The Hill)

Only going to move so fast Joe…Bureaucracy. Washington style..

FDA’s Peter Marks, MD, says it will take weeks for the agency to complete its review of Pfizer and Moderna’s vaccine candidates. (Business Insider)

Dozens of staff at the World Health Organization headquarters in Geneva have contracted SARS-CoV-2. (Associated Press)

Nolte: Softening Us up for ‘Great Reset’ Climate Lockdowns

“Great Reset” mastermind Klaus Schwab suggests a number of draconian measures for controlling the population under the umbrella of the ‘4th Industrial Revolution’, including risk-assessment brain scans to cross borders and implantable chips to read people’s thoughts.

The Most Revolutionary Act

Uncensored updates on world events, economics, the environment and medicine

“He that takes truth for his guide, and duty for his end, may safely trust to God’s providence to lead him aright.” - Blaise Pascal. "There is but one straight course, and that is to seek truth and pursue it steadily" – George Washington letter to Edmund Randolph — 1795. We live in a “post-truth” world. According to the dictionary, “post-truth” means, “relating to or denoting circumstances in which objective facts are less influential in shaping public opinion than appeals to emotion and personal belief.” Simply put, we now live in a culture that seems to value experience and emotion more than truth. Truth will never go away no matter how hard one might wish. Going beyond the MSM idealogical opinion/bias and their low information tabloid reality show news with a distractional superficial focus on entertainment, sensationalism, emotionalism and activist reporting – this blogs goal is to, in some small way, put a plug in the broken dam of truth and save as many as possible from the consequences—temporal and eternal. "The further a society drifts from truth, the more it will hate those who speak it." – George Orwell “There are two ways to be fooled. One is to believe what isn’t true; the other is to refuse to believe what is true.” ― Soren Kierkegaard

Talk Wisdom's goal is to defend the tenets and values of Biblical Christian faith. We defend our Constitutional Republic and Charters of Freedom, especially when speaking out against destructive social and political issues. As followers of our Savior and Lord, we should boldly stand up for Jesus Christ in our present circumstances. He is our Savior, Lord, and King, and His love needs to be shed abroad in our hearts and in our world - now.

This WordPress.com site is the bee's knees

Absolute Truth from the Word of God

JESUS HAS EVERY ANSWER

Watching our environment ... our health ... and corporations ... exposing lies and corruption

Back To Stable Hill
Confessions of a Technophobe

Insightful Analysis and Commentary for U.S. and Global Equity Investors