The best way to sum up UBCs is that they are designed to change the definition of possession of a firearm from the current definition used by BATFE and pretty much everyone with more than three working brain cells — “ownership” — to “physical possession” of the firearm. Here’s how that would work under the UBC rules as drafted by Michael Bloomberg’s “law fare” group (which we were able to prove in Colorado).

You simply cannot make this stuff up…

The U.S. Department of Justice now has joined the gun control craze and has reportedly sent a whole “gun control package” to the White House.

And it’s not hard to imagine what might be in this package. After all, Attorney General Barr has demonstrated outright hostility to the Second Amendment.

Tell Congress Your Guns are OFF LIMITS!

Which means we could now be looking at a two-pronged assault on your RKBA rights – one attack from Congress, and another from the DOJ.

Due to this added pressure from the DOJ to infringe on your rights, we need to become even more aggressive in our opposition.

Tell Congress Your Guns are OFF LIMITS!

Accordingly, we have instructed our Legislative Advocates to redouble their efforts to persuade Pres. Trump and Congress to back off their unconstitutional proposals.

But we need to you keep reminding these despots that enacting ANY new gun control is unconstitutional and UNFORGIVABLE.

Senate Republicans have told us that their offices have been flooded with calls from voters asking FOR gun control. You read that right.

I wouldn’t be surprised if George Soros is running paid calls to Senators to make them believe that American voters now support gun control.

We need to do something huge to fight back, so we’re conducting a massive public opinion survey to show Republican Senators what American voters like YOU truly believe in regards to our Second Amendment rights.

Please take our “Truth About American Voters Survey” to show Senate Republicans what the American people REALLY think about our Second Amendment rights.

Your voice carries an unbelievable amount of power in Washington, Kevin.

President Trump is even listening to you.

After flooding the White House with calls and letters signed by grassroots Americans like you, President Trump is now backing away from expanding background checks, calling it “a slippery slope” to gun confiscation.

While this is certainly good news, our fight to destroy Lindsey Graham’s Red Flag Gun Grab bill is far from over.

They enable SWAT teams to come banging on your door to take your firearms all because you were labeled a ‘threat.’

If Republicans pass Red Flag Gun Grabs, I truly believe they will risk devastation at the polls in 2020.

It’s time for Republican Senators to take a page out of President Trump’s book and start listening to the American people.

But first, we’ll need YOU to speak up and cut through the lies and coordinated efforts by the anti-gun lobby to ensure Republican Senators hear Americans’ TRUE beliefs about the Second Amendment.

‘Red Flag” gun confiscation measures are set for a vote in the House NEXT WEEK. And we need to act immediately to stop them!

The House Judiciary Committee on Wednesday will vote to advance two disastrous gun confiscation bills, teeing up a floor vote in the House.

HR 1236 would spend YOUR taxpayer dollars and give them to states that adopt local gun confiscation programs.

And HR 3076 would empower the federal government to SEIZE your firearms under this “Red Flag” scheme.

We cannot stress enough how important it is that these bills be defeated.

They would enable people you barely know to request that your guns be taken away without you being convicted of a crime.

Your rights would be taken away in a secret Kangaroo Court without giving you the chance to confront your accuser.

And this abusive system would force you to hire expensive attorneys in order to get your guns back.

This is the mass gun confiscation system anti-gunners have always dreamed about. And it’s set for a vote NEXT WEDNESDAY!

So please take IMMEDIATE ACTION to stop them! Tell members of the House Judiciary Committee you won’t stand for their gun confiscation scheme.

Use our Take Action tools to send your voice of opposition to Congress – RIGHT NOW.

Failure to act quickly will almost certainly mean these twin gun seizure bills advancing toward a full vote in the House.

I am beginning to get more then disgusted with many whom own guns and claim their Right to own them.

Yet do nothing to voice their objections to the crap Minnesota’s Democrats are trying to pull..

Say something dammit!! Click the Red Button!! Damn letter is pre-written! You can modify it if you so desire!

Otherwise like those that claim their Votes don’t matter, sit back and watch your Guns disappear!!

On Monday, the Minnesota House is scheduled to consider the House Public Safety/Judiciary Omnibus legislation.  This bill has been amended to contain House File 8 and House File 9, two gun control measures heavily opposed by NRA.  Please contact your state Representative and strongly urge them to OPPOSE the House Public Safety/Judiciary omnibus legislation.

House File 9, sponsored by Rep. Ruth Richardson (52B-DFL), would violate an individual’s constitutional rights and allow for a chief law enforcement officer or designee to petition the court for an ex parte order to remove an individual’s Second Amendment rights without due process.

Now it’s up to the Repuplikan Senate majority to put a halt to this..

Because if they don’t, that POS in the Governor’s Mansion will sign them..

I best go shopping this weekend….

We only have a few days left until anti-gunners in the House put YOUR God-given rights to a vote. A vote is expected this week!

If Nancy Pelosi succeeds in passing its radical H.R. 8 — the anti-gun lobby will have taken a giant first step toward achieving its BIGGEST goals of 2019:

…and ANYONE who refuses to comply — even if they just hand their gun to a close friend for ONE second — could be sent to prison.

And then there’s a companion bill, H.R. 1112, that will also be voted on this week. This language would penalize every gun purchaser who receives a non-committal response from the FBI — essentially extending the 3-day waiting period to a minimum of two weeks.

And that’s the minimum! The worst-case scenario is that the Attorney General can hold up your gun purchases indefinitely, which is a distinct possibility under this bill.

It is our God-given right to bear arms, and we will not sit by and allow the government to dictate what we can and cannot do with our own property.

This is just the FIRST of many attacks Nancy Pelosi and her army of anti-gunners have planned now that they’re back in power.

And as America’s NO COMPROMISE gun advocacy group, we cannot allow them to gain this early victory.

Stand up to this attack on YOUR 2A rights by sending this pre-written letter to YOUR Congressman, urging them to oppose H.R. 8 and protect YOUR God-given rights from this anti-gun crusade.

New Report on Where Criminals Get Their Guns

From the Department of Justice. It’s nothing earth shattering, but it’s a good update to old surveys of prison inmates. Among prisoners serving time for a crime during which they possessed a gun, about half got their weapons either on the underground market (43 percent) or through theft (6 percent). Meanwhile, 10 percent bought guns from a retail source, including 0.8 percent who bought them at gun…..
Textual analysis of HR8, bill to “To require a background check for every firearm sale”
This week, U.S. Rep. Mike Thompson (D-Calif.) introduced HR8. According to the title, the bill is “To require a background check for every firearm sale.” The bill does that–and a great deal more. Summary HR8 requires that loans, gifts…

It’s been a rough year for gun companies, the NRA, and the Second Amendment as a whole. Parkland was just the last straw in a lot of people’s minds, and now things have ramped up to the point where the firearm community has been back on its heels.
Wisconsin AG Calls For Passage Of Red Flag Law
Throughout the nation, more and more states seem to be passing Red Flag Laws. The idea is simple. You take guns away from people who are exhibiting signs that they’re about to do something violent. It’s supposed to be a temporary thing and, at least on the surface, it sounds like something that…..
Tell Your Members of Congress to Oppose “Universal” Background Check Bills
This week two bills were introduced in Congress to impose so-called “universal” background checks. The bills, H.R. 8 and S. 42, are being misleadingly described as simply requiring background checks on all sales of firearms, but… 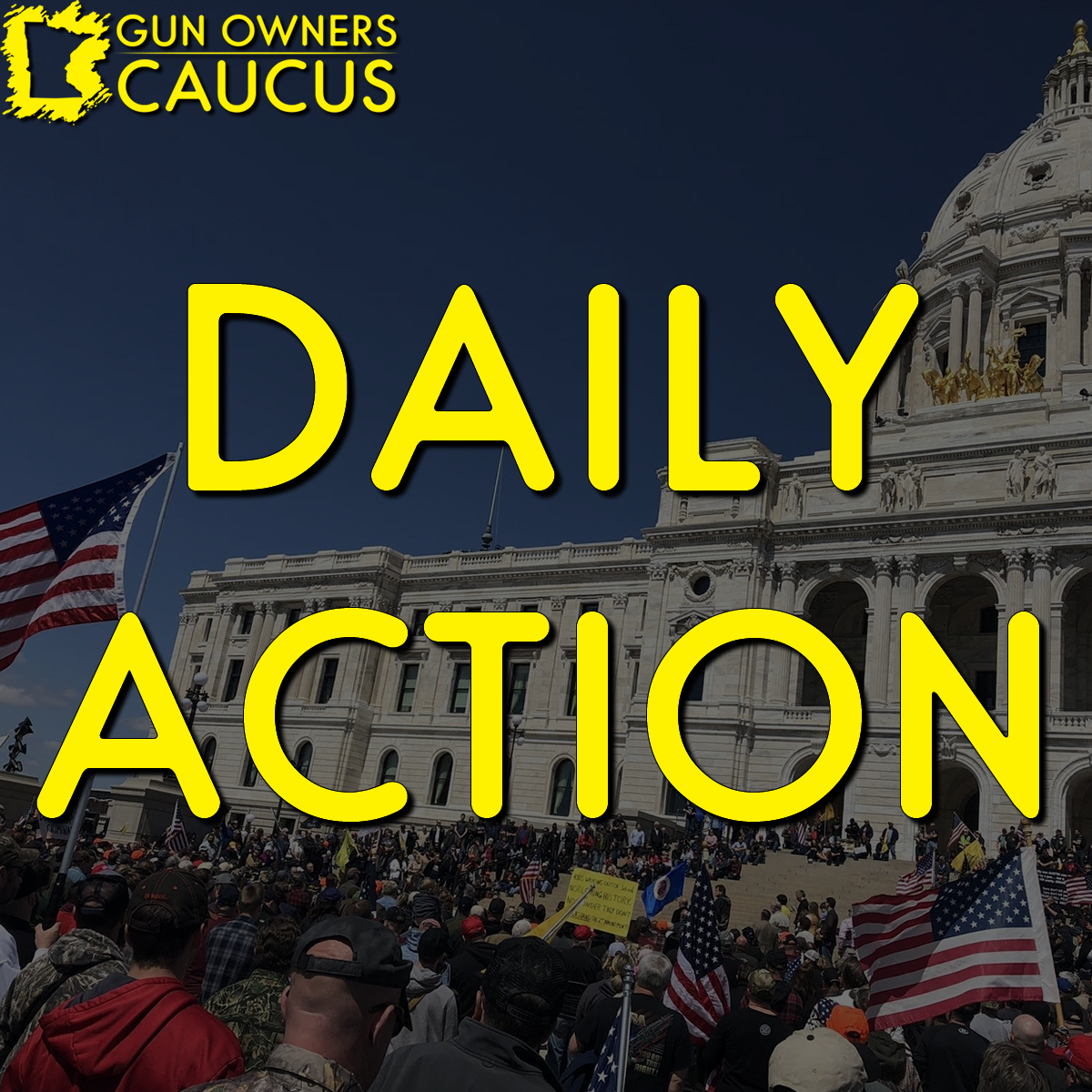 It’s Friday and the legislature is adjourned until Monday, so we generally do not expect any new bills or developments today.

Today’s daily action is to work to stop Universal Gun Registration Legislation. Today’s actions should take you no more than 3-5 minutes.